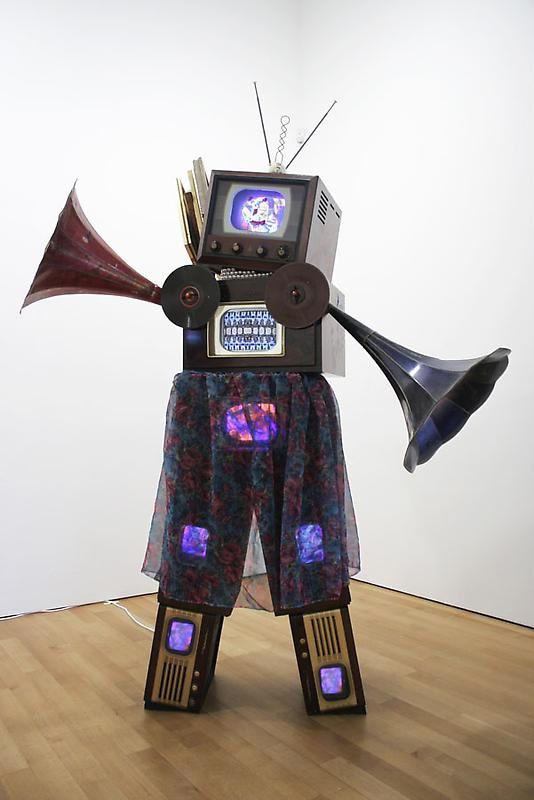 As subversive than comic, works of the father of video art Nam June Paik (1932-2006) are now exhibited at the James Cohan Gallery, until May 30, in New York. The Gallery chose to present pieces made from 1972 until 1994, which gather the amazing Robot sculptures, live feed installations and other video sculpture from this period.

Against the seriousness of modern art, this Korean born artist was one of the major representative and active members of the neo Dada movement Fluxus. With John Cage, Charlotte Moorman, George Maciunas and others, they wanted to create an attitude and forms through new combinations of objects, sounds, images and texts, and were all very aware of the radical life’s change that would provoke the new technologies of their generations. Furthermore, instead of expressing theses ideas violently, one of the watchwords of Fluxus was the humor.

In this exhibition, we have the pleasure to dive into this atmosphere, in the same time light and deep: The robot sculptures for instance, are representations of different people how inspired Nam June Paik : one – we recognize him by the felt hat and the cage he hangs- is Joseph Beuys, who was also part of Fluxus; the second is the American feminist and writer Gertrude Stein, who gives the impression of a great energy by the position of her Victrola-horn arms – which actually are phonographs.  Those sculptures, that he started constructing in 1964, are built with televisions or other materials displaying videos. “Skin has become inadequate in interfacing with reality. Technology has become the body's new membrane of existence” said Nam June Paik. The subversive idea under those works was also to symbolize how far the society was pervaded by images.  He had a very accurate prescience of his future, and thus, even if his pieces were thought 40 years ago, they remain very actual.

Another ironic comment on the experience of television is “Enlightment Compressed” (1954), a bronze statue of a Buddha, sitting on aquarium stones, watching his own reflection on a television screen. It points out the lake of self-reflexivity of the  television experience, playing with the impossibility of a Buddha being able to reach a higher level of consciousness by watching television.
The live-feed works displayed in the gallery slightly change topic, but in the same field: a close circuit image displayed on a TV monitor is real time video captured on camera : in blurring the frontier between the real and the represented, Nam June Paik make us loose our marks in the reality.

This amazing body of works showcased in the gallery is very representative of Nam June Paik’s researches. Through it, we get to understand, with humor and subversion,  how the new technologies emerging in the sixties were considered by the artists. Reality shows didn’t existed yet, but we can see they were already present in their mind, as well as a consumption society based the flow of images. 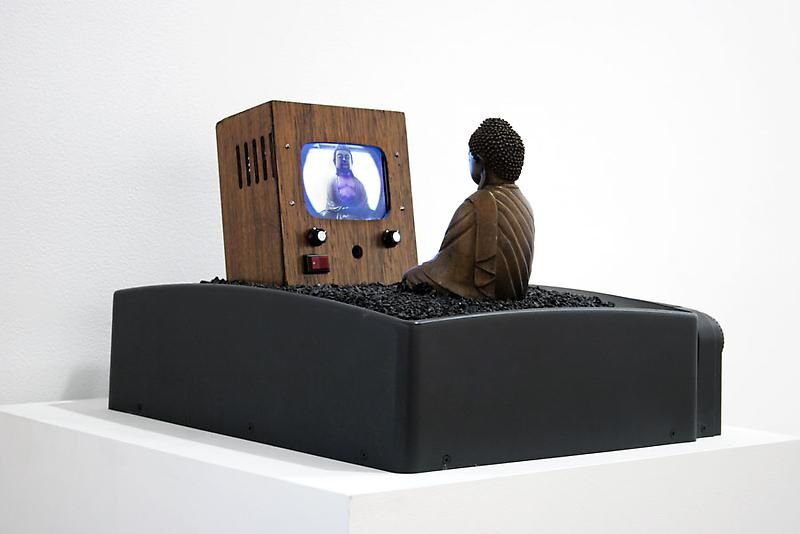 Paik's works are in the collection of a number of institutions, such as the Hirshhorn Museum and Sculpture Garden (Washington D.C.), Musée d'Art Moderne de la Ville de Paris, the Smithsonian American Art Museum (Washington D.C.), the Walker Art Center (Minneapolis, Minnesota), the Museum of Modern Art (New York), amongst others.

Published by Art and You - in Exhibitions and Fairs
write a comment …
<< Intervals – Julieta Aranda... Duane Hanson - Van de Weghe... >>

Modern art is difficult to understand for me. My last good experience was Matisse... After, all artists were a "back vision" for my "sweety eyes"..lol